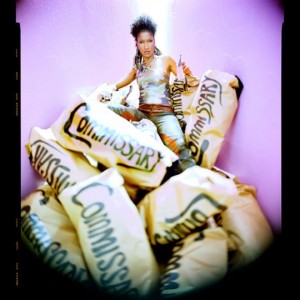 The Peculiar Patriot is a solo stage play in development by poet, performer-playwright (and Def Poetry alum) Liza Jessie Peterson. It follows Betsy LaQuanda Ross, a self-proclaimed “peculiar patriot,” who makes regular visits to penitentiaries, boosting the morale of her incarcerated friends and family. Betsy is both victim and victor of this country’s prison system and represents the millions of men and women who sojourn to penitentiaries on a regular basis, subjecting themselves to long bus rides and security checks to visit incarcerated loved ones. As this witty love story unfolds, The Peculiar Patriot gives voice to the voiceless and shines a glaring light on America’s fastest growing industry while enchanting audiences with provocative thought, hilarious dialogue, and gripping pathos.

Inspired by Liza’s decade-long work with prison populations, the play examines the human impact and inhuman machinery of mass incarceration. Betsy’s tale has become a powerful human story that impacts more than 2.5 million people behind bars, their loved ones and their communities. While The Peculiar Patriot has been performed informally, MAPP International is developing this timely project into a fully staged show that can be accessible to broader audiences

Each performance will run approximately 15 – 20 minutes. Liza Jessie Peterson is presented within the 3:45pm – 5:30pm set. Follow by a short discussion, moderated by Noel Allain.