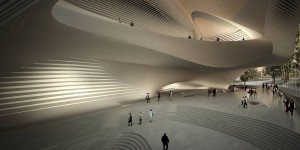 PRELUDE 2015 invited a handful of theatermakers to conceive original visions for performance architecture—anything from a building to a technology, a platform, or any other kind of structure. The results will be exhibited throughout PRELUDE.

In the Imagining Architectures for Performance panel on October 7th, participating artists will present their ideas: what would they build if they could? What spaces are missing from the urban fabric of New York City today when it comes to live arts? Could their imaginations plant seeds for future realities? Princeton architecture professor Michael Young will respond to the projects.

David Levine/CiNE
“Our project is an app, somewhere between Uber and Seamless, that will offer theater on-demand, straight to your home, and basically get rid of the entire institutional and physical architecture of theater.”

Ryan McNamara
“Real estate is a red herring. The true utopic horizon of performance is a well-paid support team.”

Mac Wellman
“Various doggies and one noble wolf deal with an odd gesture in the right foot department….”

Imagining Architecture for Performance was supported by a grant from the New York Council for the Humanities.